We have created five different car classes, which are based upon different types of cars/race series but also to cater for different abilities. Here is a diagram to show the different classes we have at Slot Car Club. Classes A, B and C are for more experienced racers due to the cars being faster but also more expensive and delicate.

Class D is for intermediate racers as a little rubbing is allowed and the racing is a lot closer and action packed.

Class E is for novice racers and we use Super Resistant cars which can withstand impacts, although we still try to avoid direct contact as much as possible.

Within each class (A-E), we have a different number of race series. Here is some further information on each class…

CLASS A – Open Wheel
This class features different types of Formula 1 cars and A1GP. These are traditional racing cars where the wheels are exposed and the cars are extremely fast and lightweight, but also very fragile.

CLASS B – Endurance
This class is for GT and sports cars where the best super cars are pushed to their limits. We also have the amazing Group C cars with their incredibly powerful engines but these can be a beast to control. This class can have short sprint races but tends to have longer races where refuelling and strategy play a part.

CLASS C – Saloons
This class features the best tin tops around. From the British Touring Car Championship, DTM from Germany, Porsche Supercup and Australian Supercars, this class has some really close racing action with cars you will see on every day roads.

CLASS D – Light Contact
Into the intermediate class and we could not think of a name for this class as it covers such a diverse range of racing series. NASCARs have some incredible races no matter if its on a road course or an oval, whilst Rallycross is a unique series with some really close competition and a ‘heat’ racing format which works perfectly with slot cars. Class D also features the incredible Mini Challenge as well as the truck racing series.

CLASS E – Super Resistant
Although this class is for novices, the Porsche Boxters can produce some of the best racing. We also have the fantastic McLaren MP4-12Cs series with 6 identical cars matching the same colours on the Powerbase and throttles, making for easy and fun racing for everyone.

Here are the number of vehicles available in each Class at the club.

* – These cars also appear in other series 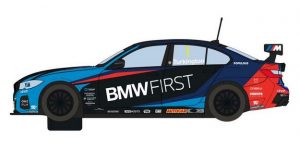 Another year has passed and Scalextric have released their 2021 range already. Not bad when you consider the world has gone through a pandemic and the wheels of manufacturing still seem to be turning and keeping to schedule. 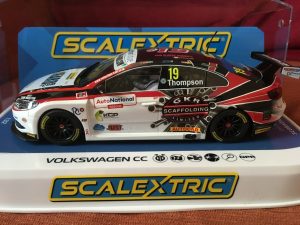 Today, we are pleased to receive the Volkswagen BTCC car of Bobby Thompson.