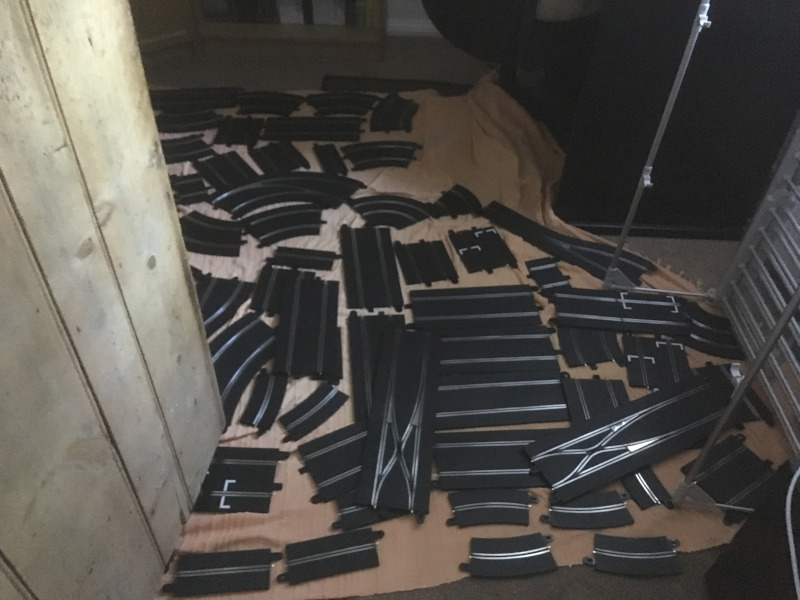 Pre-season testing for Slot Car Club’s 2019 season was affected by the heavy rain forecast last Monday as SlotCarClub found itself 5 inches under water.

The club have only recently invested in some new rubber flooring, which would be used as the base for the track. The Scalextric track was set up for the first time on Saturday and some testing began. Some further testing took place on Sunday, as the team worked through a list of small issues to get the track working perfectly.

Heavy rain was predicted during Monday and an inspection took place at 7pm on Monday and everything looked to be in good order. Although the rain eased off later in the evening, a monsoon commenced at 9pm. As the amount of water cascading down the road increased, another check was done at around 9.30pm, where flood water was found to be pouring into the club space. There was no way to stop the incoming water, so frantic efforts took place to rescue the 20 metres of track that were on the floor. The Powerbase was saved, but much of the track was submerged under the rising water before it could be lifted. This included a number of lane change sensors, which are feared to be damaged and will need to be tested to see if any can be salvaged. The timing PC also had a lot of water inside the case. Luckily we keep all the cars in plastic boxes, which had been a deliberate decision to protect them from any water/damp issues and this planning paid off as although the boxes were sitting in the water, the contents remained dry.

The surging water outside the club rose to over 2 foot deep, but luckily the water level inside the club only got to about 5 inches. Our area of Kent seems to be the worst hit from this cloudburst, with flooding taking place around all nearby roads. At once point the entire road was a river of water and some homes in the nearby village were flooded with people having to be evacuated.

The track was wiped dry that evening and placed in a warm room to get it moisture free, to prevent rust forming on the rails. Initial inspections looks like this prompt action has