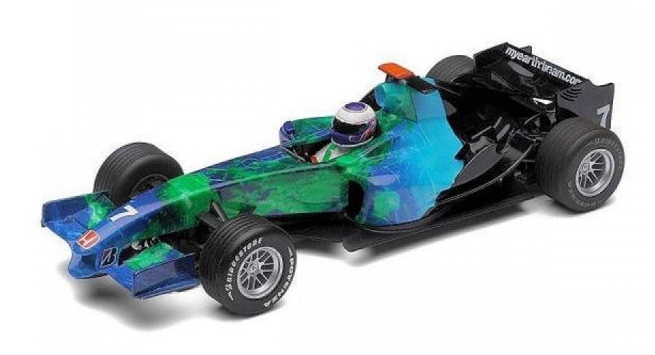 We have recently added two more Scalextric cars to our F1 stable, which will be classed as the British American Racing team (BAR). They will use the Earth car which was raced by Jensen Button and Rubens Barrichello in 2007.

Those of you with a keen eye may raise the question that the Earth cars were actually part of Honda F1 Racing cars. We are aware of that but we had a dilemma. The BAR team was set up in 1999 and initially funded by British American Tobacco until Honda became a part-owner. They raced into the mid 2000’s until tobacco sponsors were banned, at which point the team was bought our by Honda and became Honda F1 racing. The team retained the drivers and most of the original staff, so it was just a name change.

At Slot Car Club, we already have a Honda F1 team which uses the red and white livery of the early 2000’s BAR/Honda car. 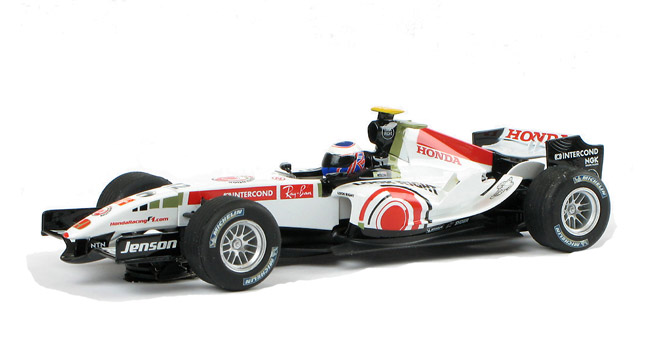 We have a choice to retain the red/white car as the Honda and have the Earth Car as the BAR or vice-versa. Although, if you want to be accurate, they should be swapped, the red/white car does have the word ‘Honda’ on the rear wing and the side bodywork(as Honda provided the engine to the BAR team).

We have decided that it would be confusing to ‘non-fans’ if the BAR F1 car was the red/white liveried car with Honda written on it and the Honda car was the green/blue/black car without the word Honda. Also, the Earth car was only around for one season and the BAR team were not around for long as an independent team, so they fit well together. So there is our final decision, the Honda car will be the one with Honda written on it.

Our F1 field has now reached 30 cars, which exceeds both a real F1 field and our pitlane garage capacity. We have covered the majority of the F1 teams from this period and have now obtained all the various team releases from Scalextric. There are other liveries available, although these would be cars from teams that we now already have two cars.